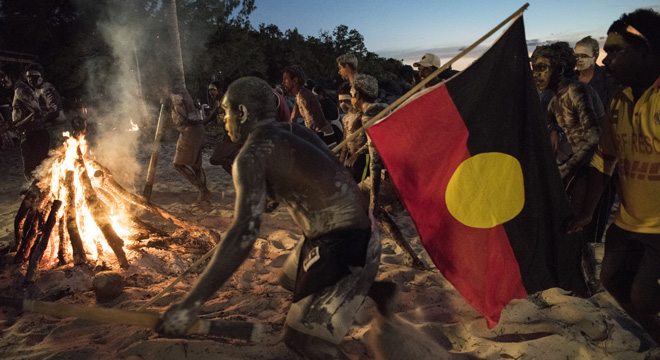 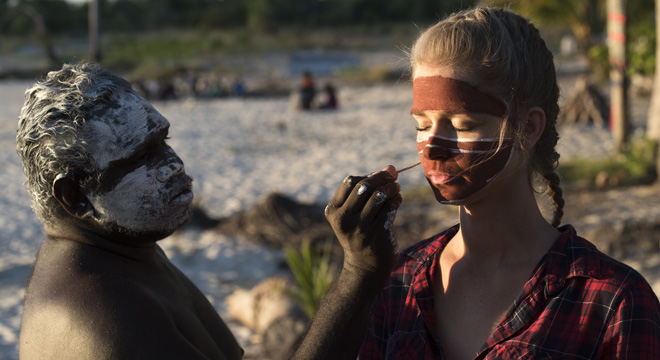 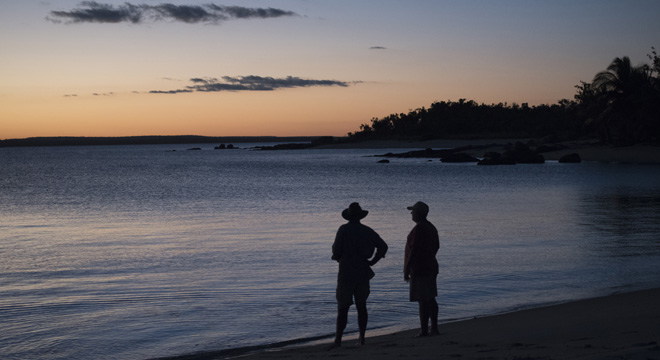 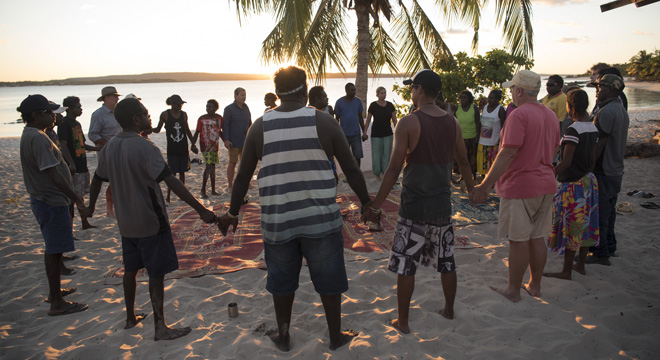 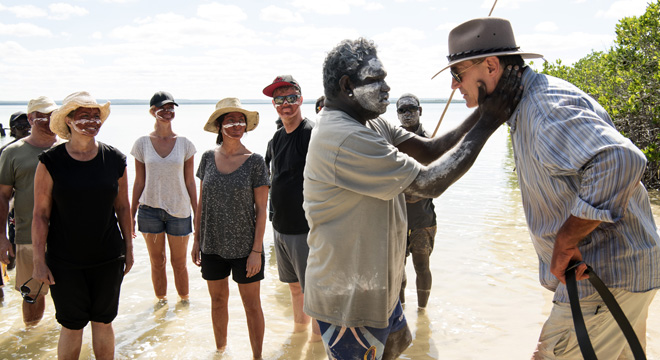 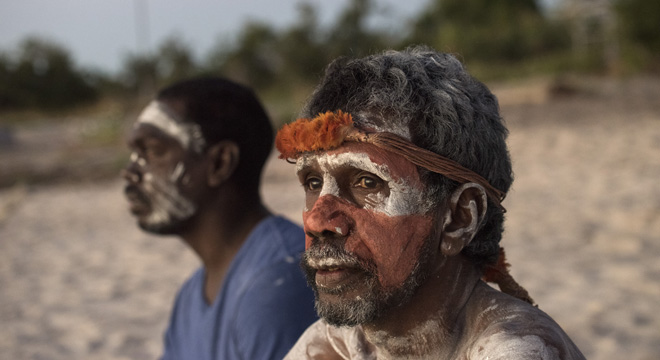 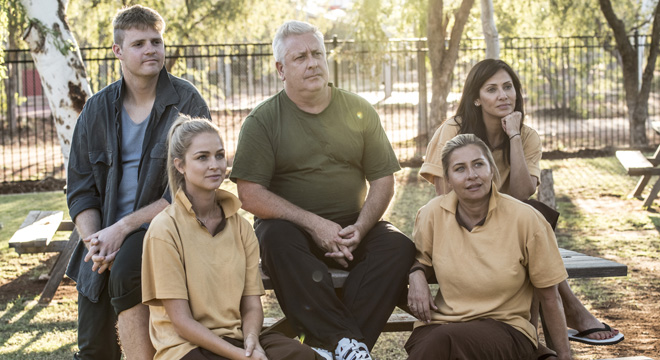 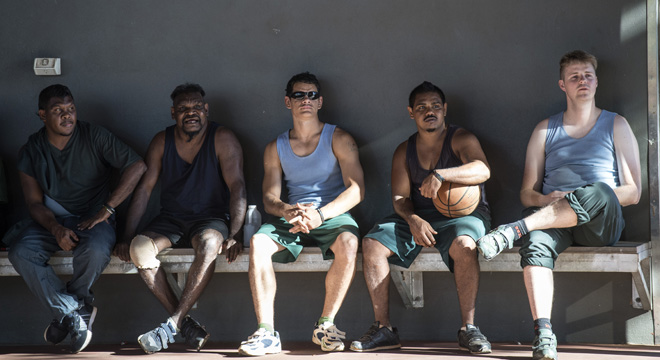 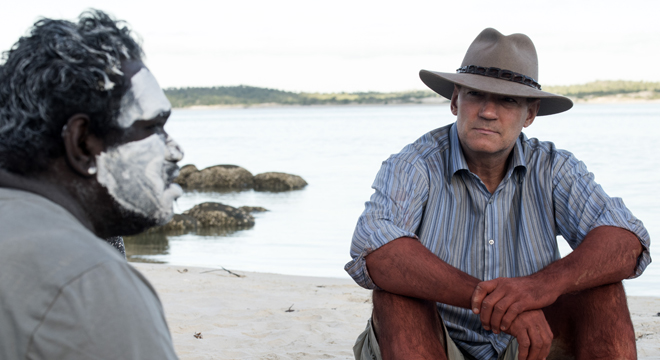 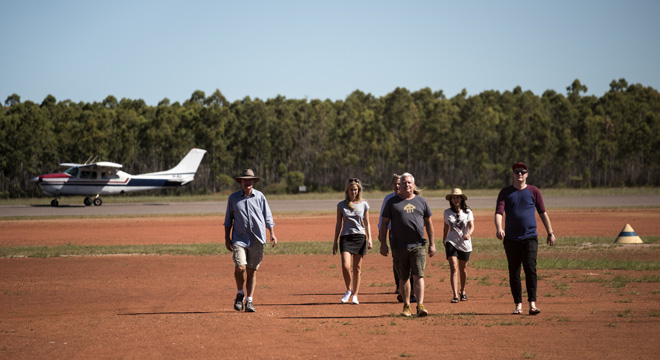 Six out of ten who call Australia home have had little or no contact with Indigenous people.

The 3 x 1 hour constructed documentary series takes a group of six well-known Australians, with strong opinions on a unique journey into Aboriginal Australia.

The group meet face to face with individuals, families and communities who define Indigenous Australia today. They are immersed into Aboriginal culture and experience what life is really like on the ground for the nation’s First Peoples.

Leaving their high profile lives behind, the six are taken deep into a world far away from their everyday reality. They are confronted and challenged by the stories they find and the people they meet. It is an experience that reveals the beauty, hope, history and trauma of Aboriginal Australia.

In this second series, the six question themselves, one another and their Indigenous hosts, to try and find answers to some burning questions.

Selected for their strong opinions, the group vigorously debates the burning issues. From Aboriginal identity to welfare. From juvenile incarceration to the Stolen Generations. From healthcare to alcohol. Education to employment.

Through the heat of argument, light is shed. As stereotypes are broken, a process of education, understanding and conversion begins.

Guided by award winning journalist Ray Martin, the group are tested in extraordinary situations, their beliefs are tested, their emotions pushed to the limit.

Renae Ayris is one of Australia’s most naturally beautiful and engaging personalities.

She has built a reputation for the highest level of professionalism and down to earth manner with a unique and natural style that makes her a modern day Aussie icon.

Renae is committed to a firm focus in the fitness / wellness categories and first came to national then international attention during her reign as Miss Universe Australia in 2012, subsequently achieving 3rd Runner Up in the worldwide competition.

Building on that early success, Renae has dedicated herself to charities that are close to her heart and ambassador roles of genuine association.

Renae has attracted considerable media attention as the face of numerous brands including Solar D, Emma & Roe and Holster, and has a strong international presence gracing the cover of Maxim Magazine and being featured in Sports Illustrated Lovely Lady of the Week.

With a huge social media following Renae epitomises the ability to provide true influence while also demonstrating the skills to produce and deliver outstanding visuals and engaging content from live experiences and video.

Tom Ballard is a stand-up comedian, writer, actor, broadcaster, philanthropist and philanderer. He co-hosted the triple j breakfast show for four years and won an ARIA for his trouble. In 2014 he got his own shiny panel
show Reality Check and has twice fronted SBS's coverage of the Sydney Gay & Lesbian Mardi Gras. He's guest hosted two episodes of Q&A, launched his own hit podcast and supported the likes of Will Anderson, Stephen Merchant and Danny Bhoy.

Last year, Tom performed alongside Wanda Sykes and roasted Jimmy Carr in Montreal and he bagged a nomination for the Best Newcomer Award at the biggest arts festival in the world, the Edinburgh Festival Fringe.

This year (so far) Tom has toured two brand new shows; an hour of stand up, and a 70min comedy lecture about the state of the Australian immigration system. His body of work gained him a nomination for the prestigious Barry Award for Most Outstanding Show, and he was awarded the inaugural Pinder Prize, named in honour of the late great John Pinder.

Tom has eczema and is bad at running.

Ian 'Dicko' Dickson is a former BMG record company executive who made his TV debut in 2003 as talent judge on the number one record-breaking show Australian Idol. Dicko was judge on Idol for five series.

Since then, Dicko has also been a talent judge on The Next Great American Band and Young Talent Time, he has presented three breakfast radio shows on FM and AM radio, hosted Celebrity Survivor, My Restaurant Rules and his own TV talk show Can of Worms and won The Celebrity Apprentice in 2012. Dicko has also donned lipstick and a dress playing Widow Twanky in Aladdin and his Wondrous Lamp on stage in 2015.

In 2016 Dicko made his return to the judges' chair on Australia's Got Talent alongside fellow superstar judges Kelly Osbourne, Sophie Monk and Eddie Perfect.

Working in the record industry, worked inside iconic labels such as Creation Records, Sony, A&M and BMG. He has worked alongside Ozzy Osbourne, Celine Dion and Primal Scream. As Head of International at BMG UK he worked on the career development of artists such as Pearl Jam, Jamiroqui, Westlife and Natalie Imbruglia.

Never far from controversy, Dicko's the bloke to tell it like it is, be it good or bad, give you a hug and shout you a pint.

Natalie Imbruglia was born and grew up in Australia. At 17, she appeared as Beth Brennan in the hit Aussie TV series “Neighbours.”

Natalie followed her small screen success with a move to London where her music career flourished. Four studio albums followed with Natalie selling over nine million albums worldwide. In 2003 she appeared onscreen in the British spy spoof Johnny English, and she starred in the critically acclaimed 2009 drama Closed for Winter.

In 2014, she made her UK stage debut in Things We Do For Love by Alan Ayckbourn. She is currently on tour with Simply Red off the back of her latest album release Male.

Natalie is also a global ambassador for Virgin Unite and spokesperson for the UN Campaign to End Fistula.

David Oldfield is a prominent Australian who has worked in all three levels of government, and been elected to two of them.

He is well known as an opponent of ‘political correctness’, which he sees as an assault on freedom of speech.

David owned his first business at 21, but the red tape and dirt of politics he encountered as a small businessman resulted in him being elected to the City of Manly Council where he spent 7 years battling bureaucracy.

As well as council, David worked in state politics and spent time in federal politics as the key portfolio advisor to then Liberal Party Minister The Hon Tony Abbott MP.

In 1997 David co-founded the Pauline Hanson’s One Nation political party and David became the best known political adviser in Australia. In 2000 he established the splinter party One Nation NSW serving as its leader until he became an independent in 2004. David served 8 years in the NSW Legislative Council from 1999 to 2007.

In 2006 he was a contestant on Celebrity Survivor - finishing in the original final three.

After retiring from Parliament in 2007, David began a career in the media, which included five years hosting his own daily talkback program on Sydney radio stations 2UE and 2GB.

David is married to Lisa Oldfield, a successful business executive who also co-hosted more than 250 episodes of
the daytime television show, The Catch-Up. David and Lisa have two young Sons, Henry and Albert - David now considers his most important responsibility to be: "Teaching my Boys everything I can”.

David’s had an active sporting life including winning multiple Australian titles and he remains relatively fit. He cellars wine, studies history, shares his life with many animals and
is especially at home on a Horse. Here and there he still pops up in the media, though these days, Family is his priority and takes up most of his time.

Nicki graduated from the Western Australian Academy of Performing Arts (WAAPA), and has since worked continuously in all aspects of the industry.

Nicki’s theatre credits are extensive, having just toured in Fiddler on the Roof and the theatre adaptation of the smash hit, Mother and Son. She appeared in dozens of productions for the MTC, including leads in Rockabye, Three Days of Rain, Romeo and Juliet, Company, Our Country’s Good, The Recruiting Officer, Measure As You Like It, The Cherry Orchard, Les Liaisons Dangereuses, Private Lives and The Memory of Water (for which she was nominated for a Green Room Award as Outstanding Female Artist). She has also worked with Playbox, Sydney Theatre Company and Black Swan. For the Production Company, Nicki has appeared as Millicent Winter in Nice Work If You Can Get It, Gypsy, Mame, 42nd Street, Thoroughly Modern Millie and Annie Get Your Gun (for which Nicki was nominated for a Green Room Award as Best Female Artist in a Supporting Role)

Her television credits include the role of Catherine in The Ex-PM, and the series Rush, City Homicide, Society Murders, MDA and Seachange.

Nicki has recently moved into directing opera, winning the 2013 Green Room Award for Best Opera Direction for Midnight Son for the Victorian Opera.

Nicki also works extensively in radio, and has narrated novels and many documentary films.